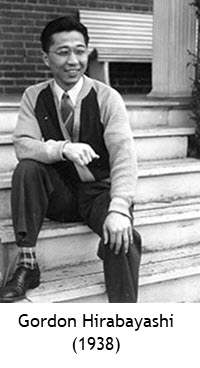 Hirabayashi v. United States, 320 U.S. 81 (1943),was a case in which the United States Supreme Court held that the application of curfews against members of a minority group were constitutional when the nation was at war with the country from which that group originated. The case arose out of the issuance of Executive Order 9066 following the attack on Pearl Harbor and the U.S. entry into World War II. President Franklin D. Roosevelt had authorized military commanders to secure areas from which "any or all persons may be excluded", and Japanese Americans living in the West Coast were subject to a curfew and other restrictions before being removed to internment camps. The plaintiff, Gordon Hirabayashi, was convicted of violating the curfew and had appealed to the Supreme Court. Yasui v. United States was a companion case decided the same day. Both convictions were overturned in coram nobis proceedings in the 1980s. Wikipedia