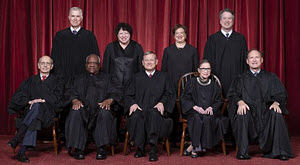 Sotomayor, J., delivered the opinion of the Court, in which Ginsburg, Breyer, Kagan, and Gorsuch, JJ., joined. Alito, J., filed a dissenting opinion, in which Roberts, C. J., and Thomas and Kavanaugh, JJ., joined.

*3 In 1868, the Crow Tribe ceded most of its territory in modern-day Montana and Wyoming to the United States. In exchange, the United States promised that the Crow Tribe “shall have the right to hunt on the unoccupied lands of the United States so long as game may be found thereon” and “peace subsists ... on the borders of the hunting districts.” Treaty Between the United States of America and the Crow Tribe of Indians (1868 Treaty), Art. IV, May 7, 1868, 15 Stat. 650. Petitioner Clayvin Herrera, a member of the Tribe, invoked this treaty right as a defense against charges of off-season hunting in Bighorn National Forest in Wyoming. The Wyoming courts held that the treaty-protected hunting right expired when Wyoming became a State and, in any event, does not permit hunting in Bighorn National Forest because that land is not “unoccupied.” We disagree. The Crow Tribe’s hunting right survived Wyoming’s statehood, and the lands within Bighorn National Forest did not become categorically “occupied” when set aside as a national reserve.