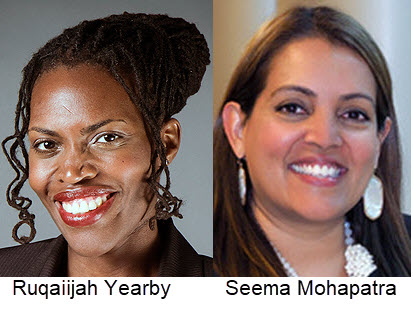 In June 2020, agricultural workers at a pistachio farm in Wasco, California, many of whom were racial and ethnic minorities, learned about a COVID-19 outbreak from other workers and the media. By that time, 150 workers and 65 family members tested positive. After the announcement, the farm started to make masks available free of cost, whereas before they were charging workers $8 per mask. In California, a COVID-19 outbreak at the Farmer John pork processing plant began in 2020 and has continued for nearly a year, ôwith more than 300 cases reported in January (2021) alone.ö A nurse asked Latinos for additional identification, made them wait for appointments and test results, and called the police saying undocumented immigrants were seeking testing at the Elkhart County, Indiana, health care site. In North Carolina, it is alleged that hospitals were sending away some Latinos even though their COVID-19 symptoms were serious enough to be admitted to the hospital. Rana Zoe Mungin, a Black teacher, was twice denied a COVID-19 test and her symptoms were dismissed by an EMT as a panic attack. She later passed away from COVID-19 at Brooklyn, New York's Brookdale Hospital. Deborah Gatewood, a Black, sixty-three-year-old Detroit health care worker, was turned away four times with COVID-19 symptoms from Beaumont Hospital, where she had worked for thirty-one years. These racial inequalities in employment and health care are associated with racial inequities in COVID-19 infections and deaths.

Historically, the federal and state government's legal and policy response to pandemics has ignored these racial inequalities in employment and health care, which are linked to racial inequities in infection and death. During the COVID-19 pandemic, the federal and state governments have not only continued to disregard these inequalities in employment and health care, but they have also enacted laws and implemented policies that further exacerbate these inequalities, harming racial and ethnic minorities. For example, prior to May 2020, Iowa's policy was to publicly confirm COVID-19 cases at businesses. However, when major COVID-19 outbreaks at meat and poultry processing plants occurred in May 2020--which were predominantly staffed by racial and ethnic minorities and undocumented immigrants--officials would only confirm outbreaks at businesses if 10% of a company's employees tested positive and reporters asked about the outbreaks. This hampered reporting of cases and local officials' efforts to control infections, as the state even limited information given to local officials, including Perry city officials, where it was later learned that 58% of employees tested positive at a Tyson plant in Perry. The failure to report cases left workers vulnerable to the workplace exposure of COVID-19. Although these laws and policies seem race ôneutral,ö they disproportionately harm racial and ethnic minorities, and are a result of systemic racism.

Systemic racism is a social system wherein the racial group in power creates a racial hierarchy that deems other racial groups to be inferior and grants those ôinferior racesö fewer resources and opportunities. In the United States, this racial hierarchy has become embedded in the government's pandemic response, often limiting racial and ethnic minorities' equal access to key resources such as employment benefits and protections, as well as COVID-19 testing, health care treatment, and vaccines. As a result, racial and ethnic minorities face increased risk of workplace exposure to COVID-19 because they work in low-wage, essential jobs that do not provide the option to work from home, and they cannot afford to miss work even when they are sick. In fact, research shows that only 16.2% of Latinos and 19.7% of Blacks have jobs that they perform from home. This means that only 1 in 6 Latinos and 1 in 5 Black workers can telework. Furthermore, the jobs often do not provide health insurance, and thus, racial and ethnic minorities lack access to appropriate testing and treatment during the COVID-19 pandemic. ôBlacks remained 1.5 times more likely to be uninsured than whites from 2010 to 2018,ö and Latinos have an uninsured rate over 2.5 times higher than the rate for whites. Due to increased workplace exposure and lack of access to treatment, racial and ethnic minorities have disproportionately been infected and died from COVID-19.

Many vulnerable communities, including those that are low-income, disabled, and elderly, have experienced inequities in COVID-19 infections and deaths. In this Essay, we use racial and ethnic minorities as an illustrative example of how the federal and state government's legal and policy response to pandemics has failed to address, and sometimes even exacerbated, inequities for many vulnerable communities. Building on the work of public health researchers, sociologists, legal scholars, and our prior work, we examine how the interplay of systemic racism, the government's pandemic response, and unequal access to resources has resulted in racial inequities in COVID-19 infections and deaths. We argue that these problems can be fixed by integrating the health justice framework, an emerging concept, into the federal and state governments' pandemic response.

The COVID-19 pandemic has laid bare the inequalities in employment and health care, which have caused racial inequities in infections and deaths. These inequalities are a result of systemic racism, wherein the pandemic responses of federal and state governments, as well as companies, have disempowered and devalued the lives of racial and ethnic minorities. This Essay attempts to outline how systemic racism played out in COVID-19, using examples in employment and health care.

Systemic racism is not a simple problem, and thus, there is not a simple solution. However, attention needs to be paid to this issue, and broad change is needed unless we want to repeat these inequities in future health emergencies. As a first step, the government must eradicate these inequalities by actively addressing systemic racism, which has not only influenced its pandemic response, but also destroyed trust in the government.

Specifically, federal and state governments must structurally remediate the inequalities in employment and health care, provide financial supports and accommodations, and engage and empower racial and ethnic minorities most impacted by COVID-19 to develop, implement, and evaluate new emergency preparedness laws and policies that aim to eradicate racial inequities.