Bring the Masks and Sanitizer: The Surprising Bipartisan Consensus about Safety Measures for In-person Voting During the Coronavirus Pandemic

Excerpted From: Joshua A. Douglas and Michael A. Zilis, Bring the Masks and Sanitizer: The Surprising Bipartisan Consensus about Safety Measures for In-person Voting During the Coronavirus Pandemic, 55 Georgia Law Review 1585 (Summer, 2021) (120 Footnotes) (Full Document) 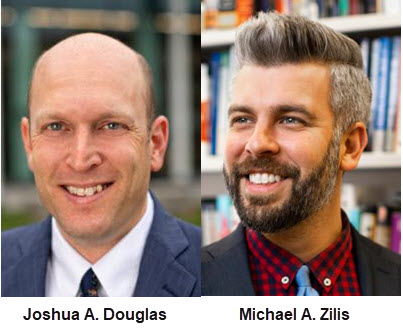 The 2020 election presented extreme challenges for administering the voting process during the COVID-19 pandemic. Election officials had to deal with a huge increase in mail-in voting while also managing major changes to in-person voting. States scrambled to find polling locations large enough to accommodate social distancing and to recruit thousands of new poll workers who were in lower-risk categories for complications of the disease. And election officials had to figure out how to administer in-person voting safely during a time when many Americans were resistant to safety measures, such as wearing a mask.

Americans are polarized with respect to their views and actions surrounding COVID-19. That polarization creates major challenges for policymakers as they attempt to craft plans and garner compliance to minimize the virus's spread. Nowhere, perhaps, were these challenges felt more acutely than when it came to the administration of the 2020 election--a major event that entailed millions of people congregating at polling places to cast their ballots. The initial onset of the virus in the United States coincided with primary season, causing sixteen states to postpone their primary elections and others to alter election procedures. Many states shifted to expanded vote-by-mail. Scholars, public health experts, and government agencies weighed in with recommendations for how to conduct the election in the safest way possible during the pandemic. Many states imposed mask mandates for people while in public, but, interestingly, a requirement to wear a mask while voting was less universal.

Requiring masks at the polls might implicate a clash between two vital rights: the constitutional right to vote and the right to protect one's health. If a state requires voters to wear a mask and the voter refuses, can the state turn the voter away? Must the state provide an alternative method to cast a ballot, such as curbside voting or voting in an isolated area? State and local election officials grappled with these issues as they crafted their election procedures. Yet the debate in 2020 over requirements to wear a mask at the polls obscured one key fact: Americans overwhelmingly supported a mask mandate for voting.

That is the new insight we provide in this Essay: when surveyed, Americans strongly supported crucial safety measures for in-person voting, and that support was high regardless of partisanship. While we examined views on vote-by-mail as of late summer 2020, we were particularly interested in which safety modifications (if any) Americans supported when it came to in-person voting. This inquiry was important for a few reasons.

First, our data told us that a substantial proportion of citizens still planned to vote in person--for a variety of reasons--even as states modified their rules to increase access to mail-in voting. In addition, although many states expanded their absentee balloting rules, five states (Indiana, Louisiana, Mississippi, Tennessee, and Texas) still required an excuse to vote by mail, with general concerns about COVID-19 not constituting a valid excuse. Many voters in these states were therefore required to vote in person. The actual voting patterns in November 2020 showed that millions of people did, in fact, vote in person, so the safety measures the states employed were crucial. Second, citizens had clear preferences about the modifications they sought to make them feel comfortable at polling places. Though difficult to measure, it is possible that some people voted in person only because of the safety measures in place. Third, states varied on the safety measures they implemented for in-person voting, but our data suggest that Americans overall would have supported even more stringent safety protocols than some states provided. This information should inform policymakers moving forward.

Importantly, Americans' views of voter safety during a pandemic did not fall neatly along partisan lines. While we observed significant partisan polarization over whether to allow expanded vote-by-mail (with concerns over “fraud” cited most commonly as the reason for opposition), there was only modest polarization when it came to views about in-person safety modifications. A large percentage of our survey respondents approved multiple safety modifications, and this held even for polarized issues such as mask requirements at the polls, which over three-quarters of our national survey respondents supported.

Yet our review of state laws and regulations surrounding the 2020 general election, at least in the five states that did not allow voters to cast absentee/mail-in ballots based solely on COVID-19 concerns, showed that states were not uniform in the safety measures they employed at the polls during in-person early voting and on Election Day. One implication of our results: by making some widely supported safety modifications, state election officials can likely increase, in a non-polarizing fashion, voters' feelings of safety when going to the polling place. That action, in turn, could boost turnout and ultimately augment the perceived legitimacy of elections moving forward.

This Essay proceeds in four Parts. Following this introduction as Part I, Part II presents our survey data, showing that, although support for expanded mail-in voting is highly polarized, views on safety measures at polling places are not. Most poignantly, Americans of all political persuasions supported a mask mandate, social distancing, and sanitizing of voting equipment, even if those measures would increase wait times. Part III considers the safety measures that states actually employed at the polls in November 2020, focusing in particular on the five states that did not allow general COVID-19 concerns to qualify as an excuse for absentee voting. Part IV looks at the litigation over mask mandates in the lead up to the November 2020 election, finding that courts generally deferred to states' rules regarding whether they required a mask. Part V offers forward-looking recommendations based on this data, suggesting that states should impose even stronger public health safety measures without fear of major partisan backlash.

Most observers agree that the 2020 election was a triumph in terms of smooth election administration. States avoided major issues with in-person voting. One reason may be that Americans generally supported the safety measures that most states put in place to help voters feel comfortable when casting their ballots.

Our survey data on safety measures at the polls shows that the issue is not as polarizing as we initially expected. The big-picture takeaway is that in-person modifications, such as mask mandates, social distancing, and the like, seem to generate consensus among the electorate. Adoption of these measures might enhance voter comfort in casting a ballot in person. Increased comfort could generate a higher turnout, which itself can improve an election's legitimacy. In addition, although there are constitutional issues to consider-- especially given that the right to vote is fundamental--states are well within their power to require masks, offer alternative voting procedures for individuals who refuse to wear one, and enforce the mask mandate through later enforcement actions instead of turning people away from the polls. Thus, from a policy perspective, adopting these measures is not only smart for public safety, it would also improve the legitimacy of an election during a public health emergency.

Professor Joshua A. Douglas is the Ashland, Inc.-Spears Distinguished Research Professor of Law at the University of Kentucky J. David Rosenberg College of Law.

Professor Michael A. Zilis is an Associate Professor in the Department of Political Science at the University of Kentucky.