Excerpted from Marilyn Yarbrough with Crystal Bennett, Cassandra and the "Sistahs": the Peculiar Treatment of African American Women in the Myth of Women as Liars Journal of Gender, Race and Justice 626-657, 634-655 (Spring 2000)(254 footnotes omitted) 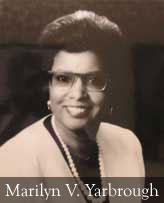 In colonial times, white men often viewed white women with suspicion and distrust. They associated white women with sexuality. However, as time passed, white women were no longer portrayed as sexual temptresses. They became celebrated as the "nobler half of humanity" and depicted as goddesses rather than sinners. White women were thereafter represented as virtuous, pure and innocent. The historical and social experiences of African women during slavery resulted in numerous images that defined African American women as deviant.

For centuries, African American women have been contrasted with white women. While the Victorian concept of "true womanhood" defined white women as possessing unquestionable moral character, African American women were defined as immoral and sinful. To white men of the era, women of all races were considered property to use and abuse. The abuse took different forms. White women, though often not subject to the same degree of physical and psychological abuse meted out to women of color, were thought of as the property of their husbands or fathers. To uphold the honor of white women, white males felt a need to protect "their" women from others. Slave women, often separated from their husbands, brothers and sons, depended on protection, if any would be forthcoming, from their "owners." These and other differences between how African American and white women were perceived and treated stem from the fact that historically, African Americans have not received the same protection of the law as their white counterparts. In addition, African American women are forced to combat the dual stereotypes of race and gender. As women, they realized that they could not presume that the law would provide sufficient protection for them. As African American women, they realized that they could not demand such protection. There is a hierarchy when credibility issues arise in the courts. It is not only a simple hierarchy of men over women, but it is one where white women are found to be more credible than African American women.

In an insightful article about victims of domestic violence, Professor Linda Ammons describes how the conduct of one African American woman was negatively contrasted with a white woman's conduct. Pamela Hill, a twenty-nine-year-old African American woman, lived with her abusive boyfriend, Roy Chaney. One night, Chaney had been drinking and began beating Hill. Hill found a knife and they struggled over it. Hill suffered serious cuts before fatally injuring Chaney. Hill testified that she had tried to get Chaney out of her apartment, "[b]ut she couldn't just throw him out into the cold." Evidence at trial showed that a year before this incident, Hill had stabbed Chaney. The prosecutor therefore deemed the relationship to be "mutually combative." During the prosecutor's closing argument, he remarked: "[A] lot of people would have you believe Pamela Hill is carrying the banner of Nicole Simpson." It was an obvious reference comparing Nicole Simpson's assumed purity and honesty with Pamela Hill's violence and dishonesty.

A stereotype persists of African American women as immoral and therefore less deserving of protection from violence or sexual exploitation. In 1744, Edward Long, in an attempt to support slavery, published his conclusions about African women. He characterized them as "ignorant, crafty, treacherous, thievish, and mistrustful."