Show Me Your Papers”: An Equal Protection Violation of the Rights of Latino Men in Trump's America 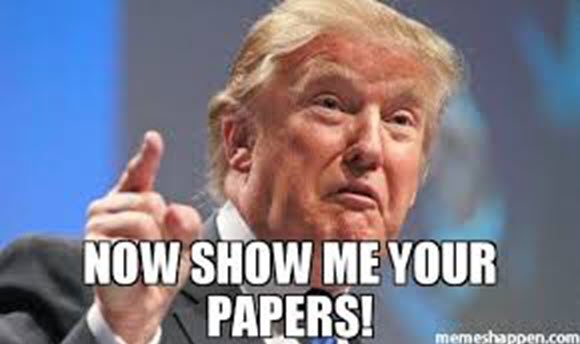 During the final presidential debate on October 19, 2016, Donald Trump said if he is elected president, his immigration plan will include deporting “bad hombres” who are bringing drugs and crime across the border. Hombres is the Spanish word for men. During the first month of Trump's presidency, Trump called for the hiring of 10,000 more U.S. Immigration Customs and Enforcement (hereinafter “ICE”) officers, who in addition to more than 20,000 already on duty, planned to carry out his plan to arrest and deport greater numbers of undocumented immigrants.

On January 25, 2017, President Trump issued Executive Order 13,768, Enhancing Public Safety in the Interior of the United States (hereinafter “EO”), which set forth the Administration's immigration enforcement and removal priorities. The Department of Homeland Security's (hereinafter “DHS”) February 20, 2017 memorandum, Enforcement of the Immigration Laws to Serve the National Interest *1158 (implementation memorandum), provided direction for the implementation of the policies set forth in the EO.

The EO and implementation memorandum expanded ICE's enforcement focus to include removable aliens who (1) have been convicted of any criminal offense; (2) have been charged with any criminal offense that has not been resolved; (3) have committed acts which constitute a chargeable criminal offense; (4) have engaged in fraud or willful misrepresentation in connection with any official matter before a governmental agency; (5) have abused any program related to receipt of public benefits; (6) are subject to a final order of removal but have not complied with their legal obligation to depart the United States; or (7) in the judgment of an immigration officer, otherwise pose a risk to public safety or national security.

The Department has directed that classes or categories of removable aliens are no longer exempted from potential enforcement.

The rules during the Obama administration, which prioritized deportation of serious criminals, are no longer enforced. Instead, ICE officers deport any undocumented individual regardless of criminal history. In Southern California, for example, “officers detained 161 people with a wide range of felony and misdemeanor convictions, and 10 who had no criminal history at all.” ICE's newfound freedom was characterized by Trump as “taking the shackles off” agents and allowing them to freely pursue those they consider illegal *1159 immigrants. Consequently, two memos released by the Department of Homeland Security, the parent agency of ICE and the Border Patrol, provided more details about how it would carry out its plan under the new administration. This plan includes Trump's signature campaign pledge of building a wall along the entire southern border of the United States as well as speedier deportations and greater reliance on local police officers to arrest and deport illegal immigrants.

In this post-election anti-immigration climate, on May 7, 2017, Senate Bill (hereinafter “SB”) 4 was cleared for implementation by a Federal appeals court in Texas. SB 4 contains a “show me your papers” provision, which requires officers to investigate any person's immigration status if they have a reasonable suspicion the person is illegally in the United States. SB 4 and similar legislation in South Carolina, Alabama, Utah, and previously in Arizona has been challenged on equal protection grounds because Spanish speakers will be racially profiled by law enforcement when stopped for minor infractions such as traffic stops. These laws were dubbed “show me your papers” laws after the first infamous attempt by Arizona lawmakers to target anyone suspected of being an illegal immigrant under the Support Our Law Enforcement and Safe Neighborhoods Act, or Arizona SB 1070. While the goal of the legislation is to target “dangerous” illegal immigrants, its effect will inconvenience all Latino immigrants, even those who were born in the United States. Texas state Representative, Rafael Achia, stated in an interview:

The Equal Protection Clause requires states to treat their citizens equally, and advocates have used it to combat discriminatory laws, policies, and government actions. This Note argues that Latino males' equal protection rights under the Fourteenth Amendment are violated because these laws, while neutral on their face, were enacted with a discriminatory motive. The overwhelming majority of deportees are Latino males. Moreover, these laws are enforced arbitrarily by law enforcement in such a way as to unfairly target Hispanic males, resulting in increased detentions and deportations of Latino men who are often the sole bread winners of their families, leaving scrambling family members behind.

This Note will be divided into six sections.

Section II will examine data from government agencies such as ICE, which shows increasing numbers of Latino male deportations because of the government's recently expanded definition of acts which constitute a crime.

Section III highlights the various “show me your papers” laws in various states and the cooperation agreements between the federal government and state governments to enforce the nation's immigration laws as a fortified front.

Section IV outlines the traditional equal protection analysis and case law utilized by the courts when challenging a facially neutral law if it was enacted with intent to discriminate and results in such disparate effect.

Section V establishes that “show me your papers” laws were enacted with discriminatory intent by legislators to target Latino males, which has resulted in a disparate effect and has caused an increase in deportations of Latino males, not females.

Section VI analyzes “show me your papers” laws under intermediate scrutiny and concludes that such laws fail intermediate scrutiny because the states' important government purpose of public safety depends solely on Latino males' stereotypes and there is no substantial relationship between the enforcement of “show me your paper laws” and the states' interest in public safety.

In Section VII, possible solutions are discussed which will advise minorities, especially Latino males who are the most affected by such xenophobic legislation, to take an active role in the political process and vote against such laws and their legislators that endorsed such laws.

This Note argues that “show me your papers” laws and similar legislation violate Latino males' equal protection rights because, although the laws are facially neutral, they were enacted with an intent to discriminate and caused a disparate impact on Latino males. Such laws are subject to an intermediate scrutiny analysis, and the only way to uphold them is if the state can show an important state interest for such laws that is substantially related to that interest. However, these statutes fail the intermediate scrutiny analysis and, therefore, are unconstitutional.

This Note argues that “show me your papers” laws fail to show both an important state interest because legislators solely relied on stereotypical views of Latino men as criminals and not on factual data. The Supreme Court has held that stereotypical notions of gender are not important state interests. In addition, the government's interest in enacting these laws is not substantially related to its public safety goals because such laws were drafted so broadly that any Latino male can become a target of law enforcement harassment. A police officer cannot tell based on one's appearance whether the person is undocumented, and these laws will force police officers to partake in racial profiling of Latino males.

Mass deportation has torn apart and undermined many of American Latino families. Already, the first decade of the twenty-first century has become a period when hundreds of thousands of Latino men have been sent back to their countries of birth, leaving children and partners struggling. Affected children, mostly citizens, not only are growing up in greater economic privation, but they also know that the United States government is responsible for exiling their fathers based on unfounded stereotypes. However, there is hope that these children will become a new generation of voters who can vote against similar anti-immigrant bills and legislators who attempt to *1200 perpetuate their own xenophobic agendas using public safety as an excuse.