The Hispanic Experience of the Child Welfare System 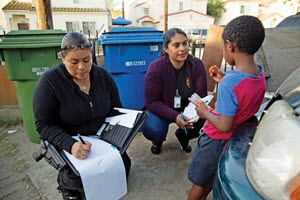 There were approximately four million reports of child maltreatment involving over seven million children in the United States in 2016 (Child Welfare Information Gateway, 2018). Once a report is made, the child welfare system is responsible for investigating child maltreatment claims and administering services to families that need assistance in caring for their children. Children may remain at home or be removed and placed into out-of-home care. In the United States, families with substantiated reports of maltreatment typically receive reunification services for up to 15 months, at which point the family is reunified or their parental rights are terminated (Erickson, 2000). The decision-making process varies based on location, as substantiation rates and recommended services differ depending on the country (Benbenishty et al., 2015).

Child welfare systems within each country have their own culture and values concerning child maltreatment. Each orientation (child protection or family service) views child maltreatment through its own problem framework and has different modes of intervention, and the relationship between parents and government can vary (Gilbert, 2012). Over time, the United States has moved from a primarily child protection focus (characterized by deviant behavior and poor parenting being the primary problems and an investigative intervention with adversarial relationships with parents) to a more combined focus between child protection, family service (increased focus on the stress of the family and emphasis on needs assessment and partnering with families), and child development (emphasizing early intervention and government involvement in caring for children; Gilbert, 2012). Even though there have been these shifts within the United States, there are still cultural mismatches that occur between the primarily dominant culture of the child welfare system and minority cultures of many of the families involved.

Previous research based in the United States indicates that children of color tend to be overrepresented in the child welfare system (Hines, Lemon, Wyatt, & Merdinger, 2004; Hogan & Siu, 1988; Shaw, Putnam-Hornstein, Magruder, & Needell, 2008) and that these children tend to experience poorer outcomes compared to their White/Caucasian counterparts (Courtney, 1994; Courtney et al., 1996; Hines, Lee, Drabble, Snowden, & Lemon, 2002; Wells & Guo, 1999). Families from minority racial/ethnic groups come into the system with a distinct constellation of risk factors (Hines et al., 2002) and have disparate experiences in the system that often result in lower reunification rates (Courtney, 1994; Courtney et al., 1996; Hines et al., 2002). Most research examining the role of race/ethnicity in child welfare has focused on comparing the experiences of African American families with White/Caucasian families (Fluke, Harden, Jenkins, & Reuhrdanz, 2011) and little research has examined the experiences of Hispanic families. Understanding Hispanic families' interactions within this child welfare system is important, as the Hispanic population is the largest minority population in the United States (U.S. Census Bureau, 2016), and the number of Hispanic families in the child welfare system has steadily increased over the last several years (Dettlaff, 2008). The proportion of Hispanic children with substantiated reports of maltreatment has more than doubled in the last 20 years (U.S. Department of Health and Human Services, 1997, 2018) and the population of Hispanic children in foster care has similarly risen (Child Welfare Information Gateway, 2017). In 2014, the percentage of children with substantiated reports of maltreatment was higher for Hispanic children than for African American children (U.S. Department of Health and Human Services, 2016).

Though rates of Hispanic children within the system are increasing, Hispanic children are still slightly underrepresented in the child welfare system as a whole when compared to general population statistics (Child Welfare Information Gateway, 2016). However, there is increasing evidence of state and regional differences, resulting in overrepresentation in some states and underrepresentation in others (Hines et al., 2004; Maguire-Jack, Lanier, Johnson-Motoyama, Welch, & Dineen, 2015). Hispanic children experience different case outcomes than White/Caucasian children and reunify at a lower rate than White/Caucasian children (Hines et al., 2002), indicating there may be differences in how Hispanics interact with the child welfare system once a case is opened.

Given the steady growth of Hispanic families in the child welfare system, it is essential to understand the risks, strengths, and needs of this population. Hispanic children tend to be younger than White/Caucasian children when they are removed from their homes, and female Hispanic children are more likely than Hispanic male children to have abuse reports substantiated by CPS workers. Hispanic families have similar levels of maltreatment compared to White/Caucasian families, but they often contend with significant service delivery disparities once they enter the system. This may be due to a variety of reasons, including poverty, bias (implicit and overt), cultural differences, immigration status, or language barriers, and it likely impairs Hispanic families' ability to reunify. Despite these risk factors for Hispanic families, significant strengths include prioritization of family relationships and lower substance abuse rates potentially acting as protective factors.

This review has several implications for child welfare policy and practices. It underscores the need to implement strategies to ensure that Hispanic families' needs are met and that these families are treated fairly and equitably within the child welfare system. Training child welfare staff in cultural competence may improve decision making and service provision, thus improving Hispanic families' outcomes. Agencies should ensure they have a diverse list of service providers so they can refer Hispanic families to culturally competent providers in the community. Research shows that better outcomes for minority families are associated with an increase in culturally competent services (Kim, 1981; Lu, Organista, Manzo, Wong, & Phung, 2001). For instance, training caseworkers in cultural competency has been shown to decrease the likelihood of out-of-home placements for Hispanic children (Dettlaff & Rycraft, 2009). In addition, the use of family group decision making (FGDM; or family/team meetings, team decision making) may be particularly effective for Hispanic families (Child Welfare Information Gateway, 2016). FGDM, or various approaches where family members are included in conversations with child welfare and court personnel to make decisions about care and services for their children, is conducive to family-focused values often held by Hispanic families. Hispanic children exit the child welfare system faster and are more likely to reunify with one or both of their parents when they participate in FGDM (Sheets et al., 2009).

Ideally, hiring more bilingual/bicultural staff to limit misinformation collected by caseworkers and to enable agencies to implement accurate case planning is important, and increasing the number of bilingual/bicultural service providers to ensure that primarily Spanish-speaking families can adequately participate in services would help considerably. There is an even greater need for bilingual/bicultural caseworkers and service providers, as there is already a shortage of availability. It is recommended that caseworkers working with primarily Spanish-speaking, immigrant, or undocumented families carry smaller caseloads because of the extra time and assistance those cases require (Ayón, 2009).

Unfortunately, the child welfare system has extremely limited funding and resources, and those sources have been declining in recent years. Findings from a recent national study show the total spending (state and federal) for child welfare in the United States has decreased for the first time since 1996 (DeVooght, Fletcher, & Cooper, 2015). The study also indicates that the federal portion of spending has decreased since 2010 and total federal funding is at its lowest level since 1998 (DeVooght et al., 2015). The lack of bilingual/bicultural child welfare staff, service providers, and child and parent lawyers is a tremendous problem for providing culturally competent services for Hispanic families.

Community colleges and universities are learning that to successfully recruit and graduate Hispanic students to later hire into these positions, they need to do a better job at reaching out to Hispanic communities and children beginning in elementary school and continue contact through high school. Introducing the idea of going to college and providing role models for elementary school children, providing access to college campuses through campus tours for middle school children, and providing internships for adolescents in high school in research labs, law offices, courts, juvenile justice agencies, service agencies, and with faculty mentors are essential for Hispanic children and adolescents to be in a position to apply to college and consider college as an option. Scholarships and grants are important for the success of these students.

Policy reform may also be necessary to improve the experiences of Hispanic families. The time frame allotted by the ASFA may need to be revised, considering the difficulties Hispanic families face in receiving and completing services in a timely manner. Additionally, the MEPA currently requires that states and agencies recruit diverse foster and adoptive families to reflect the backgrounds of the children in their system (Suleiman, 2003b). However, it does not provide funding for this recruitment, and there are no penalties for failing to comply (Suleiman, 2003b). Hispanic families may benefit if agencies are incentivized to recruit more diverse foster care families so that Hispanic children have a higher likelihood of being placed with a family that matches their culture and language.

Connie J. Beck, Ph.D., is an Associate Professor at the University of Arizona, Psychology Department.