A Great Nation Keeping its Word: the Role of Tribal Treaty Rights in Climate Change Litigation 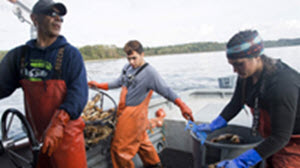 This Note explores how the encounter between two cataclysms may provide an avenue to mitigate national and global catastrophe. The first of these upheavals is the arrival of settlers to North America. The second is the snowballing alteration to our global climate system from anthropogenic sources, known as climate change. Both of these disruptions have prompted massive social, economic, and ecological changes and exacted a large cost from Indian tribes. As a result of the first upheaval, European powers--and later the United States--entered into treaties with Indian tribes and an entire body of federal Indian law emerged from their interaction. These treaties often guaranteed the continued exercise of certain rights for Indian tribes--including the right to enjoy and use essential natural resources. As this Note will explore, the resource rights reserved in these treaties and the principles that have emerged in the unique sphere of federal Indian law may provide a means to address the failure of state and federal governments to act on climate change. Such lawsuits could serve to address the specific effects of climate change on tribes whose treaty rights are increasingly under threat. At the same time, these lawsuits would have the potential to spur more general governmental action to mitigate or adapt to the impacts of climate change and to pay for its harmful consequences, with profound impacts for the rest of the world.

The question of whether treaty-based suits will be successful, or even more robust than suits by non-Indians based in tort or public trust theories, remains to be tested. Climate change lawsuits are relatively new, and the development and extension of legal doctrines to apply to climate change is slow, perhaps given the inertia and conservative nature of the law. However, tribal claims may have several advantages over those of non-Indians for establishing certain elements of standing--whose three prongs are injury in fact, traceability, and redressability for finding an affirmative government duty to act on climate change.

Treaties provide unique avenues of litigation that are unavailable to non-Indian plaintiffs. For one, they guarantee that tribes have access to certain resources. The increasing threat to these resources posed by a changing climate could violate a tribe's treaty rights. And although tribes will have to contend with difficulties in establishing traceability to climate defendants' actions, tribal treaty rights claims may face fewer issues related to redressability, such as manageable standards of judicial review and concerns about the political question doctrine, as compared to other climate change suits. Certain tribes enjoy the exercise of substantive resource rights that must be protected by federal and state governments from both governmental and third-party interference. Tribes also have a unique trust relationship with the federal government which, while often paid mere lip service, should entail specific limitations and obligations on the part of the federal government in actions--such as granting fossil fuel exploration permits--that may affect tribes.

In Part II, I provide a brief overview of Indian treaty rights, with a focus on treaty resource guarantees such as hunting, fishing, and water rights. This section explains how federal and state governmental obligations to Indian tribes developed. I discuss how these obligations emerge in part from the unique trust relationship between the federal government and Indian tribes, and then describe how such obligations relate to climate change mitigation and adaptation and why these appeals may prove more successful than appeals to the public trust doctrine.

Parts III and IV outline some potential avenues for tribes to sue state and federal governments, respectively. These sections acknowledge the barriers faced both in climate change litigation and in litigation against government entities, more generally, while arguing that tribes may have specific advantages in surmounting these challenges. It is important to note that the discussions in these last two Parts are necessarily broad and exploratory, given the relative legal novelty of the climate challenge, as well as the untested role of tribal treaty rights in confronting it. A great deal more scholarship and litigation are necessary. Yet even now it appears the confluence of Indian treaty rights and climate change litigation may engender legal breakthroughs to help tribes protect their resources and ways of life. Such developments may also help other groups mount more successful legal battles to prompt climate action.

Climate change litigation both around the world and within the United States has exploded in the past decade. It is an uncharted area of law, and many crucial elements necessary for courts to enjoin actions or grant damages remain unresolved. While the area of federal Indian law can be somewhat inconsistent and highly complex, I have shown that tribal claims may have several advantages over non-tribal claims. Because certain treaties grant substantive and justiciable rights to tribes, tribes enjoy a special form of trust relationship that limits both federal and state government action. Tribes also experience disproportionately severe impacts from climate change, in a manner that endangers their cultures and livelihoods, as well as their access to treaty resources. Because of these factors, tribes may be able to successfully surmount hurdles of standing and lead state and federal courts to make groundbreaking findings regarding governmental duties to mitigate and adapt to climate change.

Combined with shifts in public opinion regarding the urgency of climate change and pockets of advancements in climate change case law on the international stage, such results are within the realm of possibility. The treaty rights approach requires test cases in strategic venues where Indian claims are likely to be the most thoroughly and fairly adjudicated. It is possible that courts will embrace the notion, expressed by Justice Black, that “[g]reat nations, like great men, should keep their word.” At this point, everyone--not just young people or Indigenous Peoples--needs to work strategically to ensure the existing legal gaps stymying successful climate litigation are resolved. There is very little time left to deliberate about future pathways to avert catastrophe. The welfare and survival of Indigenous Peoples, future generations, and the entire planet is on the line.