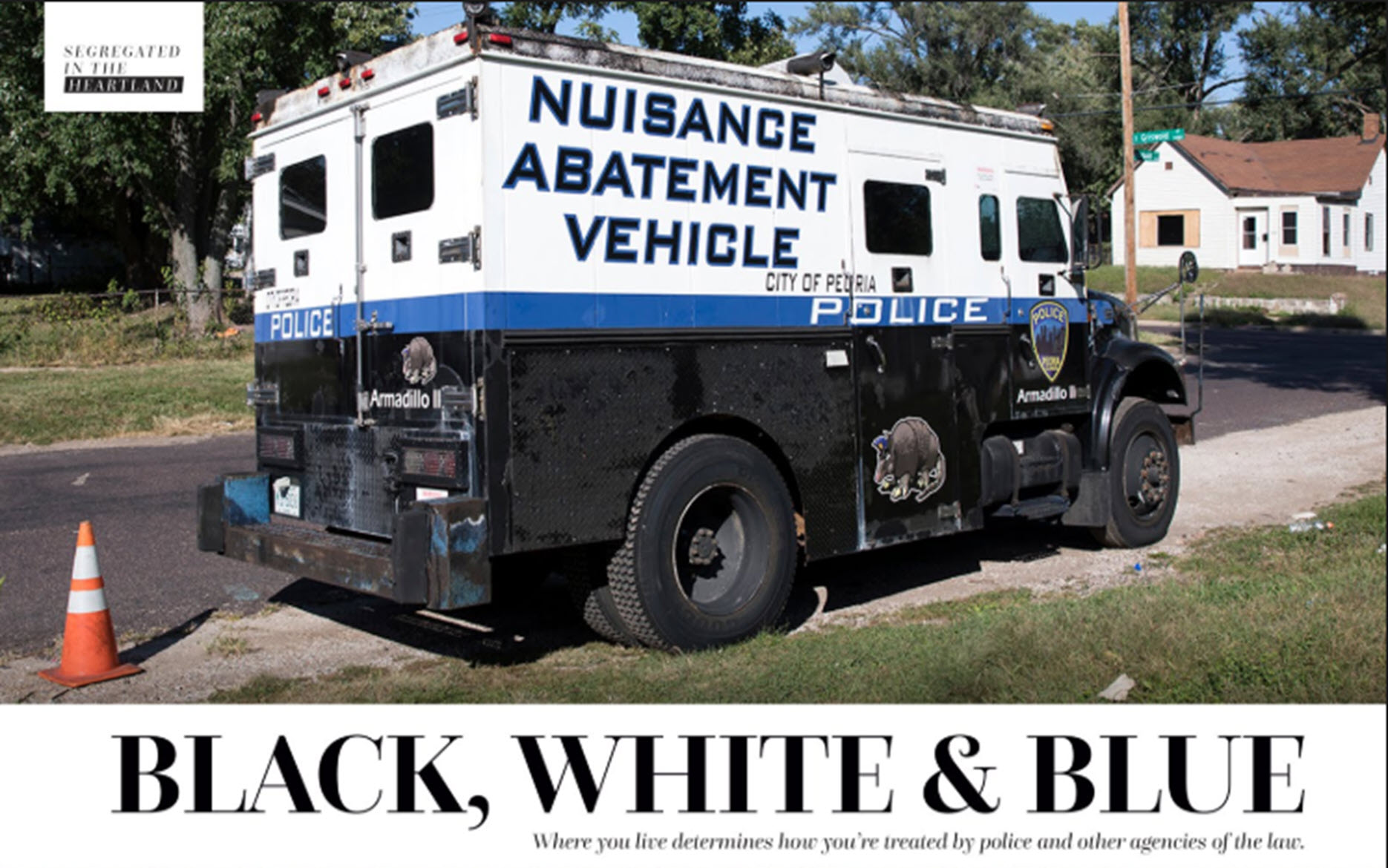 She was rapidly losing blood after her ex-boyfriend stabbed her in the neck, but Lakisha Briggs did not call 911. A neighbor saw her walking through the street, bleeding, and called for paramedics, who rushed to airlift Ms. Briggs to the hospital. When she eventually returned home, Ms. Briggs discovered her landlord was evicting her. The reason: her hometown of Norristown, Pennsylvania had a nuisance law allowing the city to fine landlords or revoke their licenses if their tenants called 911 more than three times in four months. The town had ordered Ms. Briggs' landlord to evict her, and was threatening to revoke his license if he did not. Ms. Briggs had decided not to call emergency responders because her ex-boyfriend had beaten her on prior occasions, and she knew she was close to her limit of 911 calls

Ms. Briggs, who is black and lives in a suburb where the population is about forty percent white and thirty-six percent black, is part of a nation- wide trend of black suburbanization. She was also caught in the crosshairs of another trend. Across the county, cities and suburbs--especially those with increasing minority populations--are passing ‘crimefree’ housing laws and other broad new nuisance laws that give police unprecedented discretion to compel evictions. Towns are also discriminatorily enforcing existing nuisance laws, which generally prohibit endangering the public welfare or creating unreasonable annoyances. These laws' broad nature allows for highly discretionary enforcement. Often the only way landlords can cure a violation of these laws is to evict the tenant or pay a steep fee. This leads many landlords to evict tenants over alleged and often minor nuisances. These trends have risen in tandem throughout the 2000s: Scholars have noted that many historically-white suburbs with increasing black and Latino populations are disproportionately enforcing these broad nuisance laws against minority residents--forcing them out of their homes, and perhaps even out of the neighborhood.

This is illegal. Discriminatory nuisance law enforcement that deprives minority Americans of the opportunity to live in opportunity-rich suburbs violates the Fair Housing Act (FHA). The FHA prohibits municipalities from providing residents racially-discriminatory services. Further, it bars them from making housing unavailable to individuals, including through indirect methods such as discriminatory service provision. It also prohibits municipalities from coercing, threatening, or interfering with residents' enjoyment of their dwellings. Because discriminatory enforcement of nuisance law can have each of these effects, many towns are violating the FHA

Part I describes the recent shift of America's black population from majority-urban to majority-suburban dwellers, and the increased racial integration this has brought to many suburbs--and benefits of this increased integration.

Part IV demonstrates how enforcement of discriminatory nuisance law violates the FHA because it constitutes discriminatory service provision; it makes housing unavailable to people because of their race; and it interferes with residents' enjoyment of their dwellings, all of which violate the FHA. Finally, it argues that litigants can and should use the FHA to challenge discriminatory uses of nuisance law

Across the country, from Lancaster to Antioch, as black people increasingly move into historically-white suburbs and small cities, those suburbs and cities are implementing stronger nuisance laws, and enforcing their nuisance laws disproportionately against black residents. This violates the FHA because it constitutes inferior service provision on the basis of race, makes housing unavailable on the basis of race, and coerces, intimidates, threatens, and interferes with residents' enjoyment of their dwelling on the basis of race. While not explored in depth here, discriminatory nuisance enforcement likely also violates a number of other federal laws and the Fourteenth Amendment

Ideally, no resident should ever have to challenge her town's policies through the FHA. Municipalities should proactively seek to avoid discrimination, and to promote fair housing. Litigation is a difficult and potentially expensive path for minority residents to challenge discriminatory policies, and may ultimately be very expensive for towns, who may have to pay settlements or face large judgments. Towns should avoid FHA litigation by repealing or refraining from passing laws classifying suspected criminal behavior or emergency service calls as nuisances, and ensuring that those nuisance laws they do have are narrowly tailored to address only environmental hazards and other traditional nuisances. Towns must also work to achieve bias-free policing by hiring diverse police forces and providing anti-bias trainings. Residents may find it most effective to work with their towns to achieve these goals before pursuing litigation

But the stakes here are high: Decades of research have shown that integrated housing brings social, educational, and economic benefits for all residents. The current trend of integration is too important to lose to the same forces of municipal discrimination that helped bring about the residential segregation that has marked this country for decades. When necessary, residents can--and should--fight back through litigation. In these cases, the FHA could be a powerful tool in ending municipal discrimination