Third Party at the Table: Afro-Colombian Women's Struggle for Peace and Inclusion 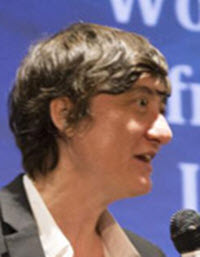 August 24, 2016 marked the end of the nearly sixty-year-long conflict between the Colombian government and the Revolutionary Armed Forces of Colombia (Fuerzas Armadas Revolucionarias de Colombia - Ejército del Pueblo, “FARC”). A month later, the Government of Colombia and the FARC signed a peace deal. In November 2016, they signed what came to be called the final Peace Accord. Years-long struggles by Afro-Colombian and other human rights advocates helped infuse human rights discourse into the peace negotiations and initial accord. Nonetheless, events during the two months after the signing of the original Accord, which led to passage of the revised Accord, permanently weakened Colombia's peace process.

Colombia's initial Peace Accord is historic, not only for ending the longest armed conflict in the Western hemisphere, but also for its inclusion of progressive provisions regarding the rights of women Afro-Colombians, Indigenous Peoples, LGBTIQ, and non-binary and gender non-conforming persons. The agreement provided a gendered lens to all the Peace Accord provisions, from rural reform and poverty alleviation, to political participation and access to justice. It explicitly named rights for LGBTIQ persons and acknowledged discrimination based on sexual orientation and gender identity. It also reaffirmed Afro-Colombian and Indigenous Peoples' collective rights, recognizing the disproportionate impact of the conflict on their territories.

In October 2016, in a surprise twist, the draft of the Peace Accord narrowly failed in a national referendum, with 50.2% voting against it and 49.8% voting in favor, a marginal difference of less than half of one percent. Led by former Colombian President and current Senator Álvaro Uribe, Conservative party voters opposed the peace process. While the majority of Colombians favored peace, the opposition, comprised of evangelical leaders and conservative members of the Colombian Congress, launched a media campaign claiming that the FARC had gained too many concessions and that President Santos was “delivering the country to terrorism.” Among their issues, conservatives held that the Accords were a front to impose a “gender ideology,” which they understood as efforts to “convert” children to homosexuality and attack traditional family values. A month later, the parties produced a revised Peace Accord, stripped of its references to the gender, racial, and ethnic inclusion it once reflected. This essay discusses how Colombia arrived at a new Accord stripped of its historic language in just two short months. It also discusses how the harbinger of conservative opposition to human rights viewed justice for women, as well as LGBTIQ, Afro-Colombian, and Indigenous people as a threat to their grip on power and therefore sought to undermine their rights during the peace negotiations process and now in the implementation process.

Colombia remains mired in the aftermath of the Western Hemisphere's longest internal armed conflict. With over seven million displaced, Colombia is home to one of the world's largest population of internally displaced persons, second only to Syria. Another 340,000 Colombian refugees live abroad.

Justice for Afro-Colombian women is difficult to achieve in a context where violence, discrimination, and historical inequities are still met with impunity. Armed violence, displacement, rape, torture, disappearances, and other human rights violations are still everyday occurrences. Land grabs by businesses exploiting Colombia's rich natural resources have been neither reversed nor resolved. Large Afro-Colombian communities and Indigenous Peoples displaced by conflict and corporations have been barred from resettling on their ancestral lands, despite laws mandating land restitution. Thousands have struggled for decades to build new lives in ramshackle settlements lacking water, electricity, schools, and basic health and social services. The root causes of violence in the country--state neglect of Afro-Colombian and Indigenous peoples' needs and interests, inequitable land rights, and poverty--remain barriers to a just society. Brutal violence perpetrated by paramilitaries, guerilla groups, Colombian security forces, and drug cartels; and lingering impunity continue to lead to mass-scale human rights violations.

Despite the challenges they face, Afro-Colombian women's rights advocates played a critical role advocating for inclusion of the groundbreaking racial and gender justice provisions in the Peace Accord between the Colombian government and the FARC. However, the failure to fully implement the accord, particularly its ethnic, racial and gender justice provisions, means that Afro-Colombian and Indigenous women and their communities continue to be subject to armed actor violence, displacement, sexual and gender-based violence, and killings and threats against their human rights defenders.

Among the more remarkable achievements of the Colombian Peace Accord are the recognition of racial, ethnic, and gender discrimination as underlying forces in the conflict, and the inclusion of provisions to directly address them. This was a hard-fought accomplishment of civil society, notably women's, LGBTIQ, Afro-Colombian, and Indigenous organizations. Afro-Colombian organizations, with strong leadership from Afro-Colombian women, developed a vision for the peace process that recognized and remedied historic injustices and discrimination committed against them, including gender discrimination, in order to ensure an inclusive and lasting peace.

In their initial negotiations in late 2012, the FARC and the Colombian government did not include race, ethnicity, gender, or other intersectional analyses in their six-point agenda, which included a broad range of topics. Most Afro-Colombians and other minorities, however, were excluded from the negotiating table during the Havana peace talks until the last minute. The absence of women in the early stages of the Havana Peace negotiations caused consternation among the women's movement and other social organizations in light of international and domestic progressive normative frameworks for gender equality in peacemaking.

After the release of the six-point agenda, Colombian social movements advocated for nearly two years, using advances under international and domestic law to build awareness and support for the integration of a gender component in the Peace Accord. They successfully advocated for the creation of a “Sub-Commission on Gender” that included civil society representation and provided a mechanism for meaningful participation in the negotiations, including the topics that had already been settled in the Peace Accord up to that point, as well as in the Final Accord. The Sub-Commission not only included the term “gender” but also included more specific terms such as “sexual orientation,” “gender identity,” and “LGBTIQ,” acknowledging the disproportionate impact of discrimination and violence against queer, nonbinary, and gender non-conforming persons during the conflict.

Afro-Colombian and Indigenous Peoples also mobilized for the inclusion of a racial and ethnic perspective in the Peace Accord. By 2015, Afro-Colombian and Indigenous groups joined together to form the Ethnic Commission for Peace and Defense of Territorial Rights. A year later, Afro-Colombian representatives were finally invited to Havana where the peace negotiations took place. They called for the recognition of racial justice issues including the right to collective reparations, safeguards to accompany the demobilization process, and meaningful participation in the peace negotiations. Unfortunately, a permanent seat at the table for Afro-Colombians and Indigenous Peoples was never created. The Commission did however, successfully lobby for inclusion of the “Ethnic Chapter” in the Peace Accord, although the government only accepted four pages of the more than twenty pages proposed. The Ethnic Chapter acknowledges the disproportionate impact of the conflict on Afro-Colombian communities, and includes key safeguards for Indigenous and Afro-Colombian territorial and individual rights, reflecting an intersectional rights-based approach that incorporates ethnicity, race, gender, women, family, and inter-generational perspectives.

The racial and gender justice safeguards under the Ethnic Chapter and other provisions in the Peace Accord require meaningful consultation with Afro-Colombian and Indigenous authorities on security planning and all other aspects of implementation that impact their Peoples and territories. As FARC-EP fighters demobilized, paramilitaries and other armed actors have filled the remaining power vacuum in many areas that heavily overlap with their territories. The lack of local planning for good governance programs and early warning response mechanisms provides new armed actors with a pathway to fill power vacuums left by the FARC. These armed groups continue to commit violence without consequences, with particularly harmful impacts on women and girls. Additionally, inadequate consultation with Afro-Colombian authorities undermines their territorial rights, worsening the social, economic, and environmental crises that have helped to fuel conflict. This ongoing, pervasive physical and economic insecurity adversely impacts Afro-Colombian women's and girls' participation and mobility, and increases their vulnerability to sexual and gender-based violence and other human rights abuses. While Colombia's protracted war may have finally come to an end, there is a long road ahead to meaningful implementation of its Peace Accord. Real implementation could lead to peace but can only be accomplished by consulting those most affected by the war.

Lisa Davis is an Associate Professor of Law and Co-Director of the Human Rights and Gender Justice (HRGJ) Clinic at the City University of New York (CUNY) School of Law.