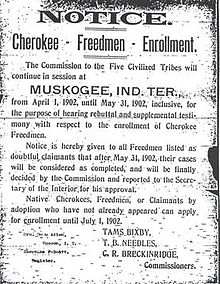 Although it is a grievous axiom of American history that the Cherokee Nation’s narrative is steeped in sorrow as a result of United States governmental policies that marginalized Native American Indians and removed them from their lands, it is, perhaps, lesser known that both nations’ chronicles share the shameful taint of African slavery. This lawsuit harkens back a century-and-a-half ago to a treaty entered into between the United States and the Cherokee Nation in the aftermath of the Civil War.

In that treaty, the Cherokee Nation promised that “never here-after shall either slavery or involuntary servitude exist in their nation” and “all freedmen who have been liberated by voluntary act of their former owners or by law, as well as all free colored persons who were in the country at the commencement of the rebellion, and are now residents therein, or who may return within six months, and their descendants, shall have all the rights of native Cherokees . . . .” Treaty With The Cherokee, 1866, U.S.-Cherokee Nation of Indians, art. 9, July 19, 1866, 14 Stat. 799 [hereinafter 1866 Treaty].

The parties to this lawsuit have called upon the Court to make a judicial determination resolving what they believe to be the “core” issue in this case, which is whether the 1866 Treaty guarantees a continuing right to Cherokee Nation citizenship for the extant descendants of freedmen listed on the Final Roll of Cherokee Freedmen compiled by the United States Commission to the Five Civilized Tribes, also known as the “Dawes Commission.”

The ultimate issues in this case are weighty and the competing interests and equities reflect the casualties of profound acts of injustice, indignity and demoralization committed during anguished times in our nation’s history. And while both the Cherokee Freedmen and the Cherokee Nation are victims of that history in different, albeit intertwined, respects, it cannot be gainsaid that the Cherokee Freedmen bear no culpability for the course of historical acts and agreements that ultimately ushered them to this Court and over which they commanded no voice, representation or power. The Court finds it confounding that the Cherokee Nation historically had no qualms about regarding freedmen as Cherokee “property” yet continues, even after 150 years, to balk when confronted with the legal imperative to treat them as Cherokee people. While the Cherokee Nation might persist in its design to perpetuate a moral injustice, this Court will not be complicit in the perpetuation of a legal injustice.

There appears to be no dispute that the Cherokee Freedmen are descendants of freedmen who were held as slaves by Cherokees and ultimately listed on the Dawes Freedmen Roll. Article 9 of the Treaty of 1866 entitles them to “all the rights of native Cherokees,” 14 Stat. at 801, which means they have a right to citizenship so long as native Cherokees have that right. Nothing in the 1866 Treaty qualified that right by subjecting it to a condition antecedent that would terminate it, including the extinction of Indian Territory upon Oklahoma statehood. Although the Cherokee Nation Constitution defines citizenship, Article 9 of the 1866 Treaty guarantees that the Cherokee Freedmen shall have the right to it for as long as native Cherokees have that right. The history, negotiations, and practical construction of the 1866 Treaty suggest no other result.