Excerpted From: Cissy Morgan, The Fundamental Right to Be Parented and the Implications for Children with Incarcerated Mothers, 37 Berkeley Journal of Gender, Law & Justice 111 (2022) (158 Footnotes) (Full Document) 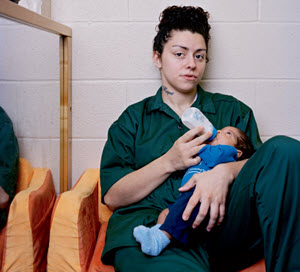 The day after Mother's Day in 2021, Jennifer Brown recounted her experience of being separated from her newborn child to the Minnesota House of Representatives in an effort to enact legislation that would end the practice of separating incarcerated women from their babies hours after they have given birth. Brown was only four months pregnant when she began her sentence at Shakopee Women's Prison. A few months later, she was allowed to temporarily leave for a scheduled C-section delivery. Forty-eight short hours after her son was delivered, Brown had to say her goodbyes as her newborn was then placed in the custody of people she did not know. During her testimony, Brown recalled that “it was so hard wanting to hold him, kiss him” and that she felt “a lot of emotions” that day.

Unfortunately, Brown and her son's experience is all too common. Research indicates that most children who are born to incarcerated mothers have only about twenty-four hours to bond before they are separated. After an incarcerated mother gives birth, she is immediately sent back to lockup while her newborn is handed over to family or friends. The child is placed into the State's custody when no one else is available to help. According to the Director of Alabama Prison Birth Project, Ashley Lovell, not only does the mother experience intense trauma during the separation process, but so does the newborn. Recently, advocates in some states have pushed to create prison nursery programs that allow children to remain with their mothers behind bars. Currently, ten states operate these nursery programs, each varying in terms of capacity.

Children's rights as they relate to parental incarceration are an area ripe for legal exploration. Chesa Boudin writes that “[w]hile there is a body of literature on the social issues presented by parental incarceration and an assortment of services and programs offered to children and families of prisoners, there is surprisingly little written about the relevant legal issues.” Some scholars have creatively proposed that children possess a First Amendment freedom of association right and a due process liberty interest in a relationship with their convicted parents. In this Comment, I contribute to the existing legal literature by arguing that children possess a substantive due process right to be parented. As such, this Comment is motivated by two key questions: Do children with incarcerated mothers in fact possess a fundamental right to be parented? And is this fundamental right infringed when children do not have access to their parents via prison nursery programs?

This Comment is organized into six parts. Part I highlights an increase in female incarceration rates and a corresponding increase in the number of children with incarcerated parents. Part II documents the historical practice of allowing infants to remain in correctional facilities under the care of their mothers and how this practice is gaining renewed traction within the United States. Part II also discusses the mechanics of prison nurseries, criteria for participation, and program variation across state facilities. Part III introduces the Children's Rights Movement and documents the gradual social shift from viewing children as objects to rights bearers. This section also considers Justice Stevens's dissent in Troxel v. Granville, in which he argues that children possess a fundamental right to preserve their intimate relationships. Part IV introduces the Supreme Court's liberal approach to interpreting the liberties protected by the Due Process Clause as unenumerated fundamental rights. Part V applies the Court's approach to argue that children possess a fundamental right to be parented, focusing on both the individual and social benefits of recognizing such a right. Finally, Part VI argues that children's fundamental right to be parented is violated when 1) States do not operate prison nursery programs or 2) States prevent infant-mother pairs from participating in nursery programs solely due to a mother's history of violence. As the social commitment to the notion of children's rights continues to gain prominence, this Comment prescribes a tangible step in the right direction, but maintains that the ultimate goal is to no longer view prisons as a tool that can solve society's problems.

The legal issues presented by parental incarceration are surprisingly understudied. This Comment sought to expand on the existing legal literature by arguing that not only do children possess a fundamental right to be parented, but that right is infringed upon when states do not allow children to access their mothers via prison nursery programs. While the goal of this Comment is to offer a temporary solution to addresses the routine practice of separating infants from their incarcerated mothers, the ultimate goal for child advocates, however, should not be to put children in prisons alongside their mothers. Child advocates should instead strive to end the proliferation of prisons, the disproportionate incarceration of people of color, and the practice of incarcerating mothers altogether. True solutions to the crisis of mass incarceration will require us all to stretch our imaginations. They will require us to make huge investments into our communities. They will require a shift from punitive approaches to solving crime to actively implementing restorative justice practices into our everyday life--only then can we ensure that we can live in a world where everyone's basic needs are met and where every child can be adequately taken care of by their parents.