From the Battlefield to the War on Drugs: Lessons from the Lives of Marginalized African American Military Veterans 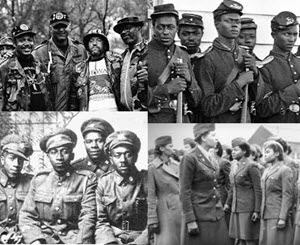 This article examines how the drug war impacts the lives of a rarely studied population: African American military veterans. The article draws on select narratives from respondents' detailed life histories documented at length in a recent book by the first author. The richness of these detailed life history interviews allows for further exploration of matters relevant to this symposium's focus on America's ongoing drug war. Veterans' narratives provide a unique view of the drug war in the context of concentrated urban poverty in marginalized communities of color. In this way, our objective is to provide an expanded and novel critique of longstanding drug war politics of “us and them”--a taken-for-granted narrative of “white denial and black blame” that has long been used to rationalize harsh punitive drug laws that have driven unprecedented numbers of poor African Americans into the bondage of mass incarceration. Indeed, as of 2010, “[m]ore young (20 to 34-year-old) African American men without a high school diploma or GED are currently behind bars (37 percent) than employed (26 percent).” It is important, however, to investigate multiple perspectives from the African American community. To this end, we attend to the experiences of unemployed, impoverished African American male military veterans.

Considering that the Vietnam era's focus on “dangerous, addicted veterans” played a major role in the Nixon administration's unprecedented “war on drugs,” makes the stories of black veterans from this era, and subsequent ones, all the more compelling. Indeed, Michelle Alexander's highly acclaimed recent book presents one such story of Drake, an African American Vietnam veteran disenfranchised for a low-level drug offense. Beyond the stories of individual veterans, however, it is important to remember that the Vietnam era perpetuated draconian policies that laid the foundation of America's modern war on drugs. The martial metaphor of drug “warfare” for the first time legitimized the United States' widespread use of military forces engaged in international anti-drug war efforts.

We pay particular attention to recent historical research that persuasively makes the case that Vietnam had a long and lasting impact on how the drug war is fought today. Taking this important background as a jumping-off point, we present selections from interviews with marginalized African Americans veterans from the Vietnam and more recent wars (Parts III-IV). We argue that veterans' stories provide an important lens for viewing the gross failings of punitive policies predicated on a distorted, and ultimately unforgiving view of impoverished African Americans in general, and impoverished African American veterans in particular. In conclusion, we reflect on the rise of recent alternatives to the punitive approach, especially the creation of veterans courts.

Indeed, as we will see, even for veterans who have received at least some Veterans Affairs (“VA”) benefits, the drug war continues to frustrate positive transitions back into civilian society. We also believe our focus on African American veterans' experiences with the drug war serves to compliment important recent research on race and mass incarceration. Attending to veterans' complex life histories shines a bright light on the particular ways the drug war has deepened longstanding and ever-deepening unemployment, housing, and health care marginalities.

In the first section of the article (Part I), we begin with key background material. Recent research documents from the outset show how the modern war on drugs launched by President Nixon depended on the scapegoating of black military veterans as “dangerous addicts” who, upon return, transformed cities into new “battlegrounds.” Both media and political leaders alike engaged in distorted claims of a drug “epidemic” that required unprecedented federal resources. This rich contextual material provides a key backdrop for exploring the actual experiences of marginalized black veterans from Vietnam and subsequent eras. We turn next (Parts IIIV) to the veterans' stories of how the drug war impacted their lives. In the Conclusion (Part V), we reflect on what the veterans' life stories teach us about the possibilities for alternatives to the war on drugs.

The stories of marginalized African American veterans provide an important and neglected critique of decades of drug warfare in the United States. Accordingly, we conclude with reflections on what may be a new era in which the criminalization model may be on the wane. Of particular interest to marginalized veterans is the rise of problem-solving courts, including the recently established veteran's courts. Considering both Carl and Andre--two veterans from different eras who nonetheless became caught up in the criminal justice system vis-à-vis involvement with illegal drugs--how might veterans courts have better served their interests? Early research suggests some promising preliminary findings, including greater access to treatment through the VA, and even findings of lowered recidivism rates.

What is of the most concern, however, is the coercive tactics deployed by judges in these institutions. Specifically, clients of veterans courts are forced to surrender their due process rights in order to be admitted into court-administered treatment programs. If veterans do not successfully complete treatment, they can potentially face harsher sanctions than if they had decided to go through a traditional criminal court. Yet problem-solving courts designed to aid veterans are not organized to confront broader social inequalities that may inhibit successful treatment outcomes. Writing about problem-solving courts, Corey Shdaimah cogently observes, “[w]ith the shortage of programs and services such as stable housing, mental and physical health care, and employment for low-income individuals, such programs raise concerns that defendants will either be internally motivated or externally pressured to plead guilty in order to access services that may be otherwise unavailable.” Although veterans courts are unique in that they directly link veterans to the VA, we are left only to question why veterans must first be criminalized in order to receive services to which they may already be entitled.

The problem with veteran's courts in particular, and problem-solving courts in general, as Shdaimah alludes to above, is that they are not equipped to confront the broader conditions of structural violence that marginalized black veterans, such as Carl and Andre, must confront on a daily basis:

“[S]tructural violence” is one way of describing social arrangements that put individuals and populations in harm's way. . . . The arrangements are structural because they are embedded in the political and economic organization of our social world; they are violent because they cause injury to people.

The deeper political and economic crisis in the present context of structural violence is directly a result of decades of a misguided war on drugs that placed the goal of mass incarceration over meaningful treatment and care, even for those American citizens willing to make the ultimate sacrifice for their country. Our interviews thus raise serious questions about the attendant criminalization of racially aggrieved neighborhoods in the United States and any meaningful role veterans courts could play in such conditions of structural violence. This is not to discount the important possibilities of connecting needlessly suffering veterans with VA services and other organizations that may provide financial benefits and other positive supports. However, to discount the limitations of these institutions would be to deny an increasingly well-documented concern about judicial coercion in drug courts. When we consider the experiences of Charles and Gerald--two veterans from different eras who were not entangled in the criminal justice system, but still suffered from a lack of community stability, health care, and employment opportunities--the coercive approach of veteran's courts seems even less efficacious. From a broader, but no less important perspective, although the public has become more critical of the war on drugs, empirical studies document deep-seated racial stereotypes of “dangerous black criminals” that are linked to support for punitive criminal justice policies.

Lionel R. Smith is a Doctoral Student, Department of Sociology and Criminal Justice, University of Delaware.

Tanya N. Whittle is a doctoral Student, Department of Sociology and Criminal Justice, University of Delaware.