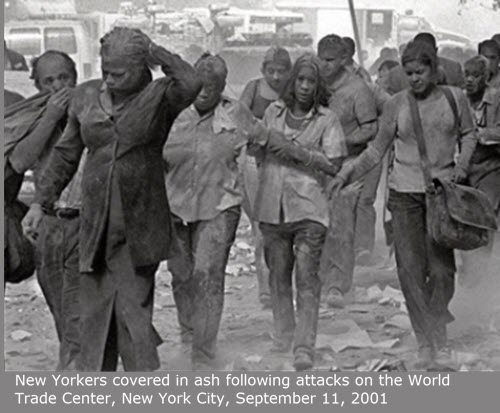 Ask anyone who lives in the Bay Area about the foreboding feeling that descended upon the area on Wednesday, September 9th. Daylight hours were engulfed in darkness with the flames of fires that have now claimed twelve lives and over 3,900 structures. Today nineteen years ago the events of 9/11 took the U.S. by surprise as New York and our nation’s capital were attacked by outside forces.

Fashion designer Patti Carpenter recalled that fateful day: “I live in the West Village, Greenwich Village… so I'm not that far from it and I'm below that 14th Street mark where they sealed off the city when it happened… I was actually on the phone with Charles [HistoryMaker Charles Randolph-Wright]… and watching 'The Today Show' in the morning and saw the first plane go in… from the moment it happened… you couldn't call anybody 'cause cell phones weren't working and lines were busy… we walked outside and the people were walking up Hudson [Street] coming from the World Trade Center… covered in the white ash and just looking like ghosts and the blank stares of people who just couldn't believe what they have come out of, and calling all around and desperately trying to find friends that worked there.”[1] Jazz legend Sonny Rollins similarly remembered: “All of a sudden I heard pow. I said, ‘Gee, what is that?’… sounds like something happened with a plane or something down by the river 'cause we lived right on the Hudson River... Then the news began talking about it. So I went downstairs… we came out, I looked up, there were flames coming out of the World Trade Center… everybody was wow standing there, women were screaming… The other building was not within sight but they said hey they hit the other building. Once they hit that all these people down in the street from the, from the house and the area, we said, ‘Wow we better start running.’”[2]

The Pentagon after being hit by a plane, Washington D.C., September 11, 2001 TIAA-CREF president and CEO Roger Ferguson describes being in Washington D.C. where he served as vice chairman of the Federal Reserve board of governors: “I was the only governor in Washington, D.C. I'm at my desk as usual… I turn on the TV, I see the second plane go into the second tower, obviously not a coincidence… what I do know is it's gonna be a scramble in Manhattan… others could leave… but I was not gonna evacuate my location. That proved to be really pretty important, because everybody else was moving around the city out of touch, my phones were still working… [I] became the spider in the web of information flow, the SEC [Securities Exchange Commission], the CFTC [Commodity Futures Trading Commission], the Treasury [U.S. Department of the Treasury], the White House [Washington, D.C.], the New York Fed, a number of the important banks… So we kept the financial system together. The second thing that we announced was that the Federal Reserve System was open and operating and that we were prepared to lend money.”[3] Major General Clifford Stanley, the first African American to command a U.S. Marine Corps Infantry Regiment, was also in Washington D.C., and recounted the destruction at the Pentagon: “They called us and then we got the word that the Pentagon had been hit… the plane went in at the bottom. And the implosion took place, and the office was just destroyed… So, we lost equipment. And then people in the surrounding offices, there were some people killed… people were just incinerated where they sat.”[4]

Producer Stephanie Hughley heard the news on the other side of the world: “I was in Amman, Jordan on September 11th at another conference of the Middle Eastern world… and happened to be out in a little city called Jerash [Jordan] at some Roman ruins… this Italian woman came running over to us and said… they bombed your country. And we were like ‘oh my God, what do you mean?’ And she said I just heard… I got a phone call, they bombed your country. And so we all were like whoa… we started back and… heard the woman scream again, say they bombed you again… There were about eight or nine of us from all over this country. And you know some of them didn't wanna leave 'cause they were afraid to go and then some didn't wanna stay 'cause they were afraid that they would come looking for the Americans. And you know it's a predominantly Palestinian state. But Israel had closed the airspace so we couldn't fly out. So it was a pretty intense moment.”[5] Days later upon her return to New York, “the towers were still smoldering. And the airport was desolate, no one was there. There were not taxis… it was so strange.”[6]

Long security lines at John F. Kennedy International Airport, New York City Newspaper columnist Donna Britt explained: “People became more paranoid. The government became more paranoid. People who look a certain way and have a certain background, suddenly became much more suspect. Everything changed.”[7] Magazine editor Corynne Corbett also pointed out that “post 9/11 the media landscape changed crazy… I worked at Elle, Elle was the heyday I would say of magazine world. Trips all over… Car service everywhere. Lavish parties and etc… Then 9/11 happened and everything got smaller in terms of mindset.”[8]

The first African American cameraman hired by CBS News, Robert Tutman, explained: “When you see a disaster like that that has never been happened before, and they [news reporters] don't know how to cover it… there are a lot of health risks… I talked to Harold Dow who covered that [9/11 attacks]… and Harold told me… ‘Tutman… they got me.’ I said, ‘What happened?’ He said, ‘Man, I breathed that dust in and it's killing me man,’ he says, ‘I was at that thing and I've got a late stage asthma and I think it's killing me man.’… Black reporter, CBS, goes in, first responder, covering it… they don't know what these things are and it killed him [in 2010].”[9] Lt. Gen. Willie Williams, the first African American director of the U.S. Marine Corps staff at Marine Corps headquarters, described working at the Pentagon after the attack: “When I look out and look out across the Memorial Garden out there… each of those benches… which accounts for the number that was killed, whether it be on the plane or in the building… it's a constant reminder of the times that we're in… sometimes it's difficult to understand how something that's happening so far away can impact what we consider to be our freedom here in the homeland… we didn't think it could happen, but it can happen. And that's proof that it does happen. And it could happen again, if we're not careful.”[10]

New York Mets’ Shea Stadium serving as a donation center after 9/11 Harriet Michelle, then president and CEO of the National Minority Suppliers Development Council in New York City, remembered: “9/11 forced us all… to slow down… to be much more caring about one another, and there was a certain tenderness, I think, of New Yorkers after that toward one another 'cause our psyches… and our faith, and our sense of security had all been blown to smithereens, and there was a great need for us as a city to kinda come together and feel a camaraderie and a common spirit in order to fight and, and survive and re-emerge as a city that we used to be.”[11] Still, people and businesses had to carry on. Michel continued to explain how business was conducted in the aftermath: “We had five thousand people show up at that conference; a lotta corporate people didn't come because their corporations wouldn't allow them to fly, but damn if those entrepreneurs didn't come. And I think those of us who came almost had a survivor mentality. That was one of the best conferences we ever had; the sense of, we made it, we are here, we have done this. And so the closeness that people felt and the camaraderie that people felt that year was extraordinary.”[12]

Former American Express CEO Ken Chenault talks about the tough decisions that had to be made post-9/11 after he lost eleven employees that day: “One of the real challenges from a leadership standpoint is how to be decisive and compassionate… we were going to have to lay off employees. Many people in my top executive team said this is not the time to do it… and I said we have to do this in a compassionate way with our employees.”[13] Well known lawyer Theodore Wells, Jr. added: “Ken made clear that American Express and its employees were not going to cut and run, but they were going to stay in Lower Manhattan and rebuild Lower Manhattan.”[14]

In the meantime, former Ford Foundation president Franklin A. Thomas was tapped to chair the nonprofit September 11 Fund, and oversee the disbursement of funds to the affected families. Thomas said of the project: "There is sadness about the attacks and all the horror and damage they caused that will never fully go away… we are thankful to have had the opportunity to help."[15]

Wall memorializing victims of police brutality, Rogers Park, Chicago, Illinois, 2020 We find ourselves at another seminal period in our history with a series of unforeseen tragedies. It is important that we draw strength on this day of 9/11 remembrance about the indomitably of the human spirit. In her interview, Stephanie Hughley added that “everybody wants the same thing in life. We all wanna be happy, we wanna be at peace. We want our children to be able to go to bed full and warm… we want them to be educated… we want them to learn about the world…”[16]