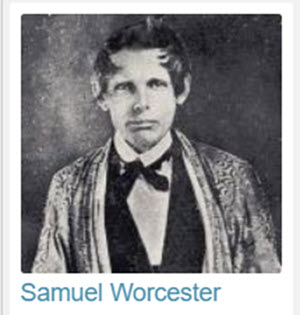 Worcester v. Georgia, 31 U.S. (6 Pet.) 515 (1832), was a case in which the United States Supreme Court vacated the conviction of Samuel Worcester and held that the Georgia criminal statute that prohibited non-Native Americans from being present on Native American lands without a license from the state was unconstitutional. Wikipedia

The opinion is most famous for its dicta, which laid out the relationship between tribes and the state and federal governments. It is considered to have built the foundations of the doctrine of tribal sovereignty in the United States.  Wikipedia

Chief Justice John Marshall laid out in this opinion that the relationship between the Indian Nations and the United States is that of nations. He reasoned that the United States, in the character of the federal government, inherited the rights of Great Britain as they were held by that nation. Those rights, he stated, include the sole right to deal with the Indian nations in North America, to the exclusion of any other European power. This did not include the rights of possession to their land or political dominion over their laws. He acknowledged that the exercise of conquest and purchase can give political dominion, but those are in the hands of the federal government, and individual states had no authority in American Indian affairs. Georgia's statute was therefore invalid. Wikipedia