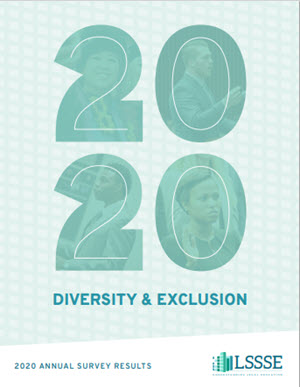 Newly-released data by the Law School Survey of Student Engagement (LSSSE) provides a compelling look at law student perceptions and experiences along various measures of diversity and inclusion.  Data from this Report, Diversity & Exclusion draw from a new Diversity and Inclusiveness Module that LSSSE began offering this year.  Of the 68 law schools that participated in the LSSSE survey in 2020, 28 law schools opted to administer the additional Diversity and Inclusiveness Module, which resulted in over 5,200 student participants.

“While many law schools have focused on improving diversity, this report reveals that we must not lose sight of inclusion,” said Meera E. Deo, Director of LSSSE.   “Many of our most vulnerable students—including those who are marginalized based on their race/ethnicity, gender, sexual orientation, debt load, and first-gen status—are telling us that we need to do more to show we value them, to prove they belong, to make them comfortable in legal education and the legal profession.”

Noteworthy findings from the report include (the full report is below):

•        Almost a quarter (23%) of Black law students believe their schools do “very little” to foster support for racial/ethnic diversity on campus, compared to just 6.8% of White students.
•        Roughly a third (32%) of White students see their schools as doing “very much” to support racial/ethnic diversity, compared to only 18% of their Black classmates.
•        Even more dramatic are intersectional identity findings: a full 26% of Black women—more than any other raceXgender group—see their schools doing “very little” to create an environment that is supportive of different racial/ethnic identities, as compared to just 5.5% of White men.
•        Men are also more likely to see their campus as a “supportive environment for gender diversity,” with 39% believing this “very much” as opposed to 27% of women students, and only 9% of students who identify as another gender identity.
•        A full third (33%) of first-generation students and 38% of students owing over $200,000 report that they do not feel valued by their law schools.

•        31% of White students strongly agree they feel part of the community at their institution, compared to only 21% of Native American and Black students.
•        Women of color are more likely than men from their same racial/ethnic backgrounds to feel that they are not part of the campus community.
•        One out of every five (21%) law students who are Black, Latinx, or Native American along with 32% of students whose parents did not finish high school note that they “do not feel comfortable being myself at this institution,” compared to just 12% of all White students.
•        38% of students who have the highest debt loads (owing over $200,000) do not feel valued by their law school, while roughly the same percentage (31%) of students with little or no debt ($40,000 or less) “strongly agree” that they are valued

•        Students with racial, gender or class privilege are less likely than their classmates to reflect on the benefits associated with their cultural identity.
•        Though 56% of White male law students believe their schools do “quite a bit” or “very much” to help them “develop the skills to confront discrimination and harassment,” a quarter (24%) of all women students and over a third (36%) of all Black students believe their schools do “very little” to equip them with these tools.