FAS is a community health issue because it imposes a significant economic cost on the community, it is totally preventable and it creates a biological underclass.

At the present time the fetal alcohol syndrome rate is 1 to 3 per 1,000 live births. This statistic is particularly disturbing since it is the only form of mental retardation which is entirely preventable.'"-" That is, if a woman does not consume alcohol during pregnancy, then the unborn child will not be affected. Yet, those who place a high value on personal autonomy reject any infringement on voluntary personal assumption of health risks.' The absolute preservation of these rights comes at the risk of impairment or death to the individual and ultimately to the community. Thus, future community planning and decision making must develop a legally supportable approach to preventing fetal alcohol syndrome even though it is an impairment produced by personal life-style choices.' 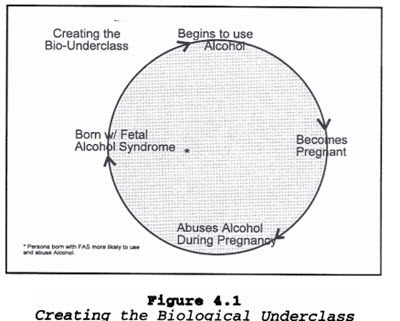 The most significant problem for society is that alcohol abuse during pregnancy creates a biological underclass. We have in America been reluctant to accept the existence of classism in our society. We have only been willing to so in the context that classism exists with theoretical mobility. (See Figure 4.1). The three-tiered conception of class (Upper, Middle and Lower) is the way class is usually thought of in this society.' It is within this structure of class that upward mobility has been the essence of the American dream."' In the new land of democracy and freedom, everyone who tried hard enough could rise and become rich. Individual initiative and persistence were automatic stair steps to financial success and upward mobility.

It is has been our dogged belief that given hard work any one can rise up the ladder. And while history has been filled with instances of sociocultural limitations (i.e., sex and race) to fulfilling the American dream, we have been equally diligent in removing all legal barriers to "equal opportunity." While we have recognized that some individuals, because of biology (i.e., mentally retarded), do not have the same access to mobility, we have viewed the problem as isolated. 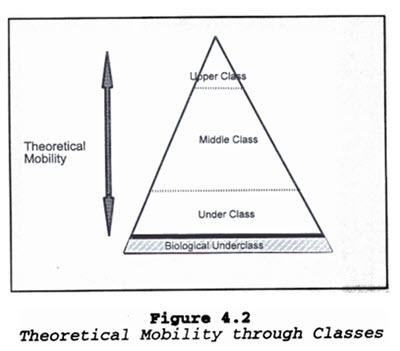 Fetal Alcohol Syndrome destroys the opportunity that is inherent in the "American dream." Individuals with fetal alcohol syndrome are mentally, emotionally, and psychological retarded. This retardation is biological and not related to environment.90 It is the behavioral and judgment problems that make FAS-affected persons likely to have children affected with FAS. Thus, a cycle of dysfunction is created with each generation of a family or a community affected more by FAS.' (See Figure 4.2).

By not interrupting the cycle of FAS, society then is contributing to the creation of a biological underclass. To understand FAS as a community health issue it is necessary to distinguish community policy issues from the medical and legal issues.